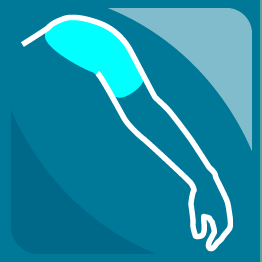 Pectoralis major tendinitis commonly occurs with athletes that repeatedly perform forward arm swinnging, throwing or lifting motions, in sports such as, swimming, tennis, rowing, wrestling, handball, track and field throwing disciplines (javelin, shot put or discus throwing), etc. When these motions get frequently repeated, the muscle and its tendon get overloaded, microdamages accumulate and cause degenereative changes and an inflammatory process which gets aleviated with rest. The inflammation can be cause by above stated nontraumatic factors, but pectoralis major tendintis can also be caused by traumatic factors, ie. after a direct fall or blow on the chest and shoulder region. Pain is gradual, it is felt during movement, located at the front part of the upper arm where the tendon connects to the humerus. With time it intensifies and it can significantly impair arm and shoulder mobility.

Treatment is commonly done through a conservative, nonsurgical approach.The inflammatory process is reduced in acute phase by use of RICE method (rest, ice, compression, elevation)  and in the following functional rehabilitation the chest muscles should get stretched and relaxed. Strengthening of pectoralis musculature should also be implemented, in both concentric and ecccentric work conditions, so that they could bear the loads put on them and to regain full shoulder and arm functionality.