This condition is characterized by painful inflammation of the bursa located just superficial to the
greater trochanter of the femur. It has the function of working as a shock absorber and as a
lubricant for the movement between the hip an the muscles and tendons of the tight. It is
characterized by pain when pressing on outher side of hip, lateral hip and/or buttock pain that may
radiate down and spreads to outer thigh and knee. Pain is exacerbated by lying on the affected
side, with prolonged standing or transitioning to a standing position, sitting with the affected leg
crossed and with climbing stairs, running or other high impact activities.
Some patients complain of a 'snapping' sound during hip movements that usually occurs due to
the iliotibial band popping over the greater trochanter.
This condition is about three times more common in women than in men and is most common in
middle aged or elderly population, rather than young people.

The causes can be different. More often the lateral hip pain is caused by disease of the gluteal
tendons that secondarily inflames the bursa. Other causes include uneven leg length, some
infections and diseases that can be associated with an inflamed fluid-filled sac (bursa), iliotibial
band syndrome, weakness of the hip abductor muscles, physical trauma, prolonged pressure on
the bursa, activities that require repetitive twisting or fast joint movement (jogging or cycling), hip
bone spurs or calcium deposits, the presence of surgical wire, implants or scar tissue in the hip
area after hip surgery.

Trochanteric bursitis does have a tendency to return with a good physical therapy and prevention
of recurrence. Physical therapy includes hip and core stabilization program. The goal is restoring a
normal hip joint range of motion, tuning of hip stability by strengthening the hip muscles, stretching
the iliotibial band, m. tensor fasciae latae and quadriceps muscles and working on core strength
and balance. This exercises will relieve tension in the hip and reduce friction. It is also necessary
to use some foot orthotics to address any biomechanical faults in the legs or feet. Commonly it
takes several weeks for the pain to ease. Symptoms can persist for months, and sometimes longer
in a small proportion of cases.
Prevention: losing weight, proper warm up prior an stretching after activity, avoiding bicycle rides
with the seat adjusted too high. When bending to lift, one should bend the knees instead of the
back or hips. Equilibrating leg length with foot orthotics if one leg is longer than the other, avoiding
overuse of the bursae (repetitive motions such as stair climbing, bicycling), avoiding pressure to
the hip area (sitting for prolonged periods or lying on one side), limiting force and repetitions. 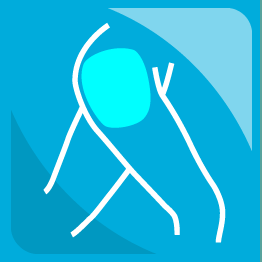