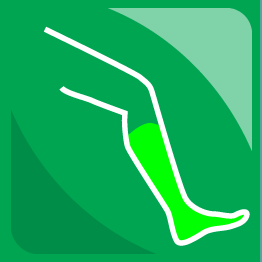 Achilles tendon is the strongest and longets tenon on the human body. It is the ending part of the tricpes surae muscle at the back of the lower leg and it connects to the lower back part of the heel bone, ie. calcaneus. Achilles tendon rupture or tear most commonly happens due to an indirect use of excesive force on an already tense tendon and it leads to tendon tissue tearing. The tendon tears at the start of running or when the person wishes to perform a  sudden change in the speed of running, ie. accelerate or sprint. Muscle activity functions through two phases, concentric and eccentric; Achilles tendon tears in the eccentric phase when the tendon is being elongated and due to its tension and added force the tendon tears, often during sudden foot movement upwards (dorsal flexion) while before that it was in maximal range of motion downwards (plantar flexion).

Degenerative changes on the tendon tissue, caused by multiple factors such as overload, low quality footwear, chronic tendon inflexibility, being overweight, aging process, etc., are the leading predisposing factors that cause Achilles tendon rupture. It is more common with male population (more often physical activity, less flexible) and it happens during acceleration, jumping, laanding, turning. The pain which occurs when the tear happens is very sharp intense and in more cases than not a snappimg sound can be heard, similar to the sound of the whip crack. After the rupture the person limps and specifically they can not stend on the toes of the injured foot or push them downward against resistance. A dent can be palpitated on the tendon at the place where the tear occured, commonly cca. 2-5 cm above the place of connection to the heel bone. 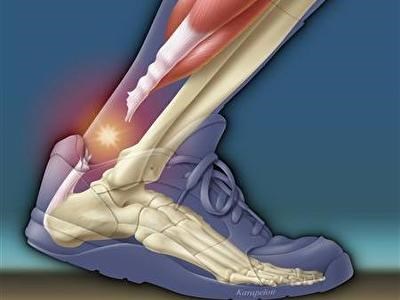 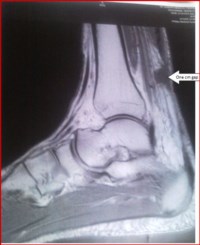 In the acute phase of treatment pain level should be decrease as much as possible through use of the RICE method (R -rest, I –ice, C –compression, E –elevation). Further treatment takes on either a surgical or a conservative approach. Conservative approach is advised to an older, not ovely physicaly active population. Earlier the course of conservative rehabilitation implied a 12 week immobilization of the injured foot, but today it implies a functional tretment method where the foot is flexed downward cca. 20° and the ends of the tendon heal in that position. A short term cast is put on te leg and afterwards a specialized orthosis is given to the patient and used for 8-9 weeks during whuch period an adequate physical therapy should also be implemented.

Surgical approach, ie. stitching of the tendon is used more often as a way of treating a torn Achilles tendon. There is a variety of surgical approaches, but the most commonly used ones are stitching of the tendon and using local tendon tissue to further strenghten the place where the tendon tore. Percutaneous method is also used, its positives are that it does not imply a big cut, therefore it produces a smaller scar tissue, faster healing and active movement performance, but it also has a much higher percentage of recurrence. After surgery the leg is put into a cast or a specialized orthosis for the lenght of 6-8 weeks.

Functional phase of rehabilitation after Achilles tendon rupture should be aimed toward gaining full range of motion in the ankle and tendon, ie. regaining full elasticity of the tendon; active strenghtening of lower leg muscles through carefull, progressive approach. The focal point of  rehabilitation should be a progressive eccentric strenghtening of the m. triceps surae and through it the Achilles tendon. This phase is performed 6-8 weeks after the surgery, ie. when the immobilisation is permanently removed.