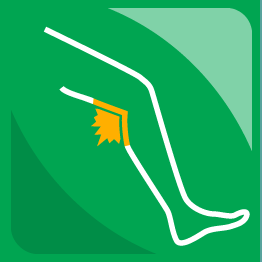 Baker's or popliteal cyst is an occurence of a soft convexity or bump at the back of the knee in the so called poplitear region, ie. fossa poplitea. The bump referes to a growing of the cyst situated between the tendons of the m. gastrocnemiusa and m. semimenbranosusa. The cyst is filled with liquid and it impairs the knee joint range of motion.

Baker's cyst develops when the sinovial membrane of the knee joint secretes an excesive amount of liquid whose purpose is joint lubrication, feeding the cartilage and keeping its surface smooth. The excess of sinovial liquid gets accumulated and creates pressure at the posterior part of the knee joint capsule leading to development of the cyst which then pushes between the tendon and muscle tissue in the poplitear region and creates a bump on the skin surface of said region that can be very easily palpitated and it can grow with time if it is not treated. The cyst develops due to knee joint capsule degeneretion, eg. with osteoarthritis, reumatoidarthritis, etc., but it can also be caused by acute knee injuries or knee joint pain syndromes. 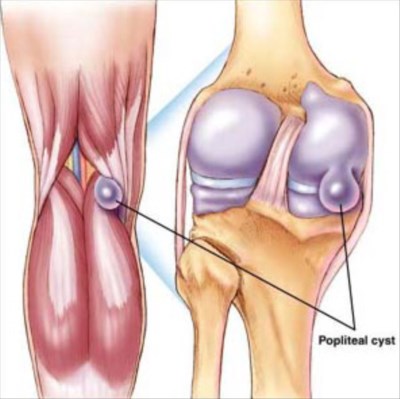 The cyst itself does not need to cause pain, unless it bursts subcutaneously and then pain develops. Pain is mainly caused by the same problem that caused the cyst to develope. The following symptoms can occur: swelling of the popliteal region, calf pain, knee instability, cyst growth  which causes knee range of motion limitations, etc. Baker's cyst is more common with female population, mostly due to the fact that women have a greater chance for osteoarthritis or reumatoid arthritis development.

Tretment of Baker's cyst can be done either non-surgically or surgically, but a conservative, non-surgical approach is more often, except in cases where the cyst causes pain and discomfort that has not been effectively treated through any other treatment approach. Conservative approach uses physical therapy to relive pain and swelling, but the most important point of tretment is determing and treating the cause of cyst in order to prevent its reccurence. The goal of therapy is preventing further joint swelling because it leads to cyst filling up and growing even more. Ice and lymph dreinage is used to reduce swelling and further cyst filling. Later on ultrasound, magnetotherapy, laser and electrotherapy are used to start muscle strenghtening. In the functional phase through kinesitherapy upper leg muscles are progressively strenghtened and knee stability should be regained through different balance exercises. Surgical tretment implies and invasive aspiration of the csyts contents, ie. dreinage of the cyst inorder to reduce it.